Lithuania is the oldest state of the Baltic countries. The Pope proclaimed Lithuania a European kingdom in 1251, after King Mindaugas united all Lithuanian tribes in the 13th century and was baptised, thus turning the young state toward the European culture. 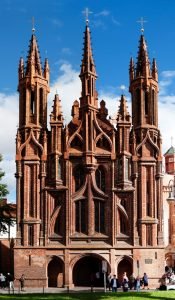 The church of St Anne is a masterpiece of the late Gothic period.

In the 13th–15th century the Grand Duchy of Lithuania developed into a large medieval state spread over the larger part of Eastern Europe. The 16th century was a time when Vilnius prospered: the capital became one of the most beautiful cities in Eastern Europe and we still admire its heritage today. The history of Lithuania is full of drama: wars and occupations account for 700 years out of 1000 years of its history. A strong longing for freedom made Lithuania independent twice: first in 1918 and again in 1990, during the “singing revolution”. Lithuania is an active member of the EU.

Today, Vilnius, as the capital of Lithuania, is the home of the President, the Seimas, the Government and the Supreme Court. Diplomatic missions, educational, cultural, financial, research, and healthcare institutions are based here. It draws attention, not only because of its unique architectural character, but also by its cultural events and attractions. The historical centre of Vilnius, the Old Town (Senamiestis) is one of the largest old town centres in Eastern Europe. The Old Town is situated in a picturesque valley of two rivers – the Vilnia and the Neris, at the crossroads of trade roads, next to the ford, which was guarded by Vilnius castle in the olden times.